LAKEVILLE, IN. – Since opening its doors in the 1965-66 school year, LaVille Jr-Sr High School has played many opponent.  Be it in the fall, winter, or spring sports, Lancer student-athletes have donned the royal blue and white to compete against schools from the South Bend area  Add to that local talent from Bremen, John Glenn, or Triton, or the newest in conference opposition from Caston, Culver Community, Knox, North Judson, Knox, or Pioneer in the Hoosier North Athletic Conference.

After a three-day vote on www.lavilleathletics.com, John Glenn was selected LaVille’s biggest rival.  The Falcons received 66% of the vote.  Bremen was a distant second with 23%, while Triton collected 11%.

“To me the biggest rivalry for LaVille is a toss up between Bremen and Glenn,” said LaVille Athletic Director and Head Football coach Will Hostrawser.  “Coming from Glenn, LaVille was always a big game for us regardless of the sport – so to me, Glenn is more of a rival.  We have a storied history of great spirited games between all of us though.” 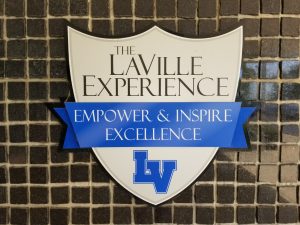 According to Head Basketball coach Michael Edison, each of the three nominated schools have great history, athletes, and coaches.

“Over the years LaVille has had many different rivals,” said Edison.  “To me, a rival is a school that has been very competitive over the years and the players and coaches know one another very well.

“When thinking of our biggest rivals it is hard not to think of Bremen and John Glenn because of the close proximity they are to our school,” continued Edison.  “Triton has also become a very big rival because of the success they have had in athletics.  I think on any given night any one of those teams could be our biggest rival.  Each of those schools have a great history and also have some unbelievable athletes and coaches that represent them.”